Fooled by Randomness: The Hidden Role of Chance in Life and in the Markets – Nassim Nicholas Taleb 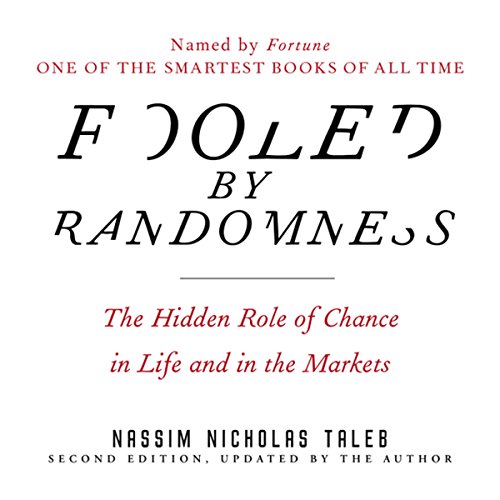 Last year my colleague was spending her time reading books of Taleb and I got curious.

Fooled by Randomness is a source of reflection and good references. I appreciated the critical approach – we really need that.

Here is a couple of fragments from the book:

I do not like the asphyxiation structure of competitive games and the diminishing aspect of deriving pride from a numerical performance. I also learned to stay away from people of a competitive nature, as they have a tendency to commoditized and reduce the world to categories, like how many papers they publish in a given year, or how they rank in the league tables. There is something nonphilosophical about investing one’s pride and ego into a “my house/library/car is bigger than that of others in my category” – it is downright foolish to claim to be first in one’s category all the while sitting on a time bomb.

To conclude, extreme empiricism, competitiveness, and absence of logical structure to one’s inference can be a quite explosive combination.

From this fragment, you may catch the writing style and the critical approach.

Popper’s idea is that science is not to be taken as seriously as it sounds (Popper when meeting Einstein did not take him as the demigod he thought he was). There are only two types of theories:

[Herbert Simon’s] His idea is that if we were to optimize at every step in life, then it would cost us an infinite amount of time and energy. Accordingly, there has to be in us an approximation process that stops somewhere. Clearly he got his intuitions from computer science – he spent his entire career at Carnegie-Mellon University in Pittsburgh, which has a reputation as a computer science center. “Satisficing” was his idea (the melding together of satisfy and suffice): You stop when you get a near-satisfactory solution. Otherwise it may take you an eternity to reach the smallest conclusion or perform the smallest act. We are therefore rational, but in a limited way: “boundedly rational.” He believed that our brains were a large optimizing machine that had build-in rules to stop somewhere.

Have a look at the book!

I'm a PhD Candidate in Computer Science and Engineering working on Explainable, Transparent Autonomous Agents as part of the ANIMATAS ITN H2020 project. View all posts by Silvia Tulli